Another aviation hero has emerged folks. Her name is Tammie Jo Shults and is being lauded after a Boeing 737 suffered a catastrophic un-contained engine failure as the aircraft headed west over the south side of New York at about 32,200ft doing around 850kph.  Her fighter pilot training skills are believed to have helped as she and the First Officer fought to stabilise the plane as it lurched in the sky and then landed at Philadelphia International Airport.

Captain Shults was one of the first women fighter pilots in the US Navy and had the skill to land the lurchy F-18 fighter jet at over 300kph on the deck of a pitching aircraft carrier.

Her calmness and her ability to deal with the emergency really settled the passengers down while the cabin crew apparently were panicking. She came over the tannoy to soothe passengers and after the touch done, walked around the cabin making all her pax feel better.

When Tammie Jo Shults wanted to learn to fly she was told that the Air Force didn’t accept girl pilots. But she fought this perception and initially studied medicine while continuing to apply at the Air Force, then the US Navy.  Eventually she was welcomed into the flying programme and became one of the first female F-18 pilots.

She went on to become an instructor before leaving the Navy in 1993 and joining Southwest.

When the Southwest Airlines flight 1380 lost its port engine,  she immediately told ATC that part of the plane was missing and she was making an emergency landing at Philadelphia Airport.

“So we have a part of the aircraft missing so we’re going to need to slow down a bit,” was her understated comment.

Here is the audio recording of the conversation she had with ATC which indicates just what a cool character Ms Shults is.

Unfortunately the bits of engine shattered a window and a passenger was partially dragged out before other passengers grabbed her and pulled her back into the cabin.

The passenger has been named as Jennifer Riordan who died as a result of injuries sustained. Seven other passengers were also injured.  Riordan was seated in  14A which is just forward of the wing trailing edge.

What is being questioned now is why the reinforced ring around the engine which is supposed to contain bits of titanium alloy fan when the turbine destroys itself did not work effectively. 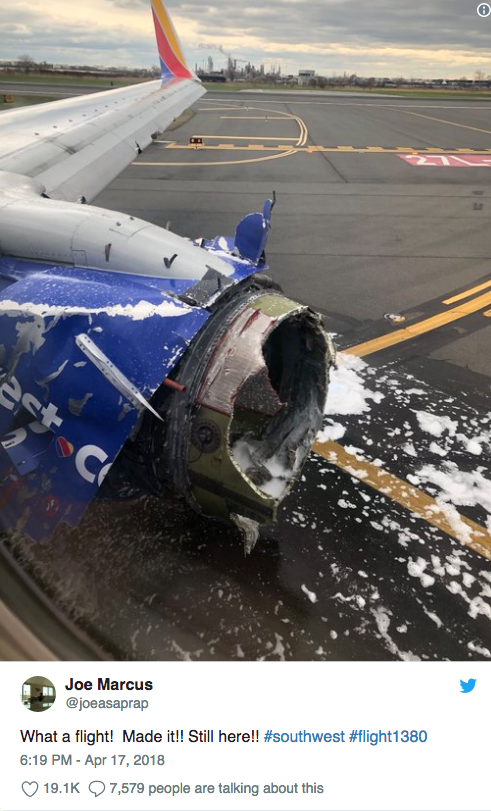 Its not the first South West Airlines event attributed to what looks like metal fatigue of the fan blade root. But its nice to know that should this happen again, pilots like Tammie Jo Shults are in the front of the plane.

“They’re in the simulator and practice emergency descents … and losing an engine … They did the job that professional airline pilots are trained to do,” National Transportation Safety Board chairman Robert Sumwalt is quoted as saying.

The airline says it has now ordered inspections of all similar engines.

“The accelerated inspections are being performed out of an abundance of caution and are expected to be completed over the next 30 days. The accelerated checks are ultrasonic inspections of fan blades of the CFM56 engines,” it said in a statement.