Its so beautiful on the highveld at this time I could just sing.  But because there are children who are easily frightened nearby, I won’t.  Let’s just say that the environment is almost perfect for an aviator right now.  Just take a look at the weather METAR for today.

Ok all that means is that at 14h00 hours today (or 1200Z for Zulu which is Universal Standard Time or two hours behind CAT), the wind was 6 knots from 240 which is slap bang down the middle of Runway 245 Lanseria.  Admittedly it also reads 190V330 which means that its variable and sometimes 190 to 330.  So coming in to land could mean a slight adjustment left or right based on where where the 6knots of wind package is coming from.  Having landed in 30knot cross-winds in a Maule (with a real aviator expert alongside) 6knots is hardly stressful.

That’s the METAR or meteorological condition past.  How about the forecast?  The TAF or Air Forecast.  Well well.

The wind is likely to drop to 5knots CAVOK (Ceiling and Visibility OK) by the afternoon, and then slow still further at 19h00 local to variable 02knots.  A light little breath.  Beautiful.  When its VRB (variable) 20knots G (gusting) 30knots I start to clamp a sphincter.

But tonight its clear and that’s good because once more instructor Steve is going to help me further understand the mysteries of instrument flying and the weather won’t be throwing me any curve balls.  Well as far as my aviation weather app shows.

Check out the surface level wind map courtesy of Nullschool.  I haven’t seen so few low pressure systems off South Africa in more than a year.  I’m sure the weather fundi’s out there will dispute this,  but its very very still out there right now.  And by there I mean most of Southern Africa. 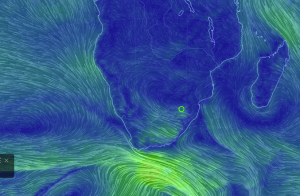 The low pressure systems are in a trough along the south of Madagascar, just off the east coast, and another trough along the west Coast.  For my Cape Town friends, sorry for you.  As you can see from the wind image alongside,  the bright green band is indicative of high winds blowing in from the Antarctic. It’s cold and rainy in Cape Town.  But for most of the rest of us in Southern Africa, the blue blue blue means very little, if any, wind.

But that’s not likely to last long as the winter cold fronts blow in from the south west. Still I’m going to enjoy the aviating and learning about vectors and radials and such and being thrown around the dark inside ZS-JAB with a big smile on me dial.  And here below is a satellite photo of the clouds.  Note Cape Town’s Med climate vs the rest. 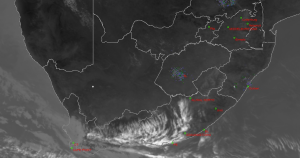