Twelve thousand miles in three days is the first line of an aviation short story published by Herbert Strang in his forgotten 1915 ‘holiday volume’ called “Comrades True” which is basically a boys own combination of short stories created in the midst of WWI.  Needless to say, with titles like “Sergeant Drought” “White Lone Land” and “A question of Courage”,  these tales are designed to motivate young lads to sign up for the mince-meat factory of the trenches of the Western Front.  But the story “To the rescue” is all about aviation.

To quote from the opening paragraph:

‘Twelve thousand miles in three days!  This was the record which Lieutenant Thesiger Smith, R.N., had established when he headed his aeroplane through a gap in the Owen Stanley range of mountains, and left the coast of New Guinea behind him on the last stage of his memorable flight.  And, indeed, there was need of haste.  It was on the previous Thursday that Lieutenant Smith had first seen the newspaper report of the wreck of the survey vessel Albatross under the command of Lieutenant Underhill, on Ysabel Island, one of the Solomon group, among the passengers being his father, Dr. Thesiger Smith (eds note – who else?), the famous geologist, and his brother Tom.

There’s much to ogle in that paragraph.  Its unbelievable that he’d managed 12 000 miles in three days.  Clearly Smith junior sprang into action and eventually saved his good father and brother.  Unfortunately their French colleague was killed by the ‘cannibal savages’.   The French army was being ripped to pieces by the Germans at the time on the Western Front and only recently had the Brits decided that the French were allies after a thousand years and more of hatred.  This meant that those who died in the short story were, well, cannibals and French.  The Germans weren’t even worth mentioning.

But its the aviation side which is fascinating reading.  This book was written when aircraft were like the space ships of today.  So Lieutenant Smith manages 12 000 miles in three days, which is remarkable considering there were NO places to refuel.  Wait, Strang was ready for that.

His preparations were quickly made.  He arranged with his friend Barracombe to cable firms in various centres on his proposed line of flight ordering fresh supplies of petrol to be in readiness; and accompanied by his mechanic Rodier, he started off in the early hours of Friday morning, flying by way of Constantinople, Karachi, Penang and Fort Darwin

As a pilot, I read the story and tried to think about what a 14 year-old would imagine reading this in the midst of a violent WWI.  My grandfather would be around the same age in 1915 and I’m sure he would have been thrilled by the exploits of the aviator traveling 12 000 miles in three days.

Back to the story.  Eventually Lt Smith tracks down a gunboat off the New Guinea coast and here’s where the fun really starts.  He needs to communicate with the crew but of course,  no radio has yet been fitted to an aeroplane.  Lt Smith hauls out his trusty megaphone and the following conversation takes place:

“Ahoy there! Who are you?” he shouted through the megaphone.

“Gunboat Frobisher, Captain Warren,” came the reply.  “Who are you?”

“The dickens! That’s my job! Where do  you hail from?”

“From London, sir; I’m here in a private capacity.  My father’s among the wrecked party.  I’m on leave.”

The fact that an aeroplane could wheel about the deck of a large ship with the pilot yelling through a megaphone and the captain of the vessel yelling back is the stuff of a mad imagination.  I can see the animation now.  Not likely but very funny.

The story ends of course with dad being saved and those vicious New Guineans running for the hills being chased by a biplane.

However the real reason for this story is the amazing latest long-haul record which is the Qatar Airways flight QR920 Boeing 777  Dreamliner which landed in New Zealand on Monday 6th February 2017. It had taken 16 hours and 23 minutes to fly from Doha in Qatar to Auckland.  That record will be broken again when the plane turns around and flies back in a few days owing to head winds which will push the flight to 17 hours or so.  On the way to the land of the long white cloud were no stops en route, and passengers paid  $1,265 one-way for an economy seat.  Business class cost a cool  $4,500. 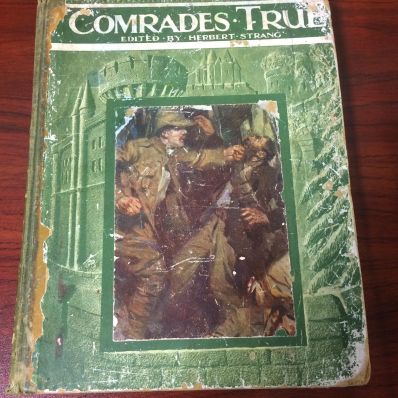 While comparisons are dangerous in this case,  its true that Orville Wright sold the Wright Company and his patents for $250,000 in 1915.  The 777-Dreamliner uses $9366 of fuel per hour which means it would have cost the company roughly $152,010,18 for the trip from Qatar to Auckland in Jet A1 alone.

Final stat of the day.  The 1915 book cost me R45 at a second hand store in Norwood, Johannesburg.